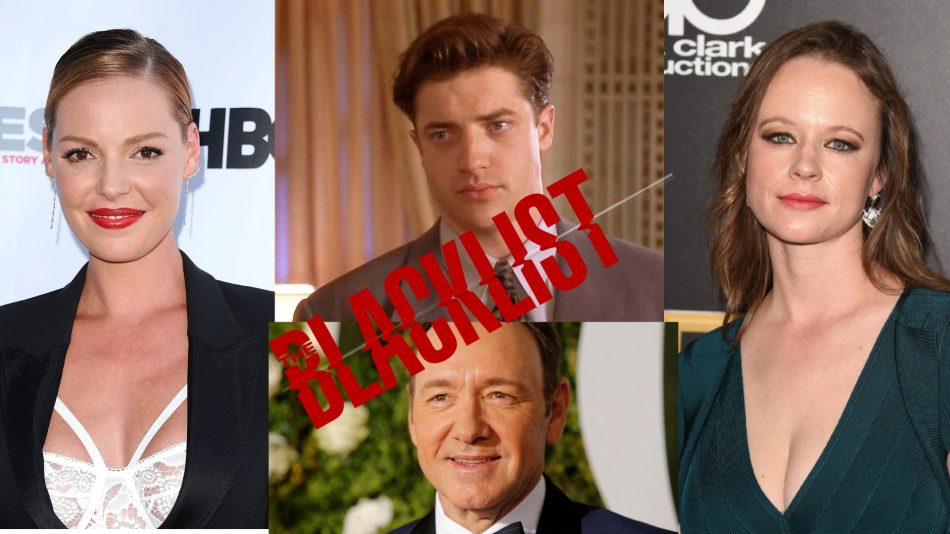 We often talk about Hollywood stars for their performance, popularity, looks, and even controversies. A lot of celebrities got a boost in their careers post a controversy, while many others faced backlash, disappointment, and even a ‘blacklisted’ tag.

Katherine Heigl was blackisted from the industry in 2008 because she was supposedly hard to work with. Katherine claims that rumors agitated that her role in ‘Grey’s Anatomy’, was drastically cut short because she behaved challenging on the sets.

As a result of these rumors, many directors refused to work with her, which ultimately took a toll on her health. However, she gathered all the courage to bounce back, and released two of her series in 2022.

Jim Caviezel was the star in the blockbuster film, ‘The Passion of the Christ’. The film did extremely well worldwide but did not bring Jim the expected results. Jim claimed after the film’s release, no one would take his calls or show any interest in working with him.

American actress Thora Birch too, faced sexism in the industry because she was supposedly ‘difficult’ to work with. Allegedly, Thora’s father/manager threatened one of her co-stars in the play, and because of this, she was tagged as the tantrum girl. As a result of this allegation, she was fired from ‘Broadway Run of Dracula.’ This move shattered her career for quite some time, and she never managed to make a comeback in full swing.

Mira Sorvino was sidelined by Harvey Weinstein and his vendettas between 1997 to 1999. Mira confessed in her conversation with the New Yorker’s Ronan Farrow that she rejected Weinstein’s frequent sexual preludes. Because of this, Weinstein convinced Peter Jackson not to cast her in his three-part Middle-Earth epic.

Sometimes your relationship can eat you, and this happened exactly with Sandra Locke. Sandra was in a long-run relationship with Clint Eastwood, for about 15 years. The couple also had several kids together, however, they weren’t married. As they grew in their relationship, Sandra got fed up with Eastwood’s behavior and decided to ditch him.

This battle between the lovers didn’t go well with the people in the industry and Sandra got abandoned from various projects. Her career never fully recovered after this incident.

Brendan Fraser was a victim of sexual assault, and his decision to raise his voice against the same blacklisted him from the industry. Brendan claimed in 2018, while attending a public event, he went ahead to shake hands with Hollywood Foreign Press Association President Phillip Berk, who allegedly grabbed Fraser’s butt.

Brendan came to the spotlight after he voiced against this action and publically excoriated Berk for his indecent behavior. As a result of this courageous step, Brendan stopped getting calls for work, and his career saw a downside post this incident.

Almost nobody in the entertainment industry has ever enjoyed a career with no scandals. In 2017, the ‘House of Cards’ actor was blamed for sexually assaulting his colleague, Anthony Rapp. Anthony claimed that Spacey assaulted him decades ago when he was underage.

As a result, the two Oscars-winning actor, Spacey, was fired from Cards, and the final season went on without him being on board. Later, Spacey tried to control the damage by announcing himself to be gay, as if gays were allowed to assault other people sexually. This damage control tactic further backfired as his statement outraged the LGBTQ community.

This is yet another case of voicing against sexual abuse. Rose McGowan was at the peak of her career when Harvey Weinstein snatched it all away with his evil motives. McGowan claims she was raped by Weinstein, who abused her not only sexually but also professionally.

Weinstein made it hard for McGowan to continue acting after this incident, which made her disappear from the industry for quite a while.

Read:- The Reason Why Miley Cyrus and Liam Hemsworth Got Divorced

Ashley Judd is yet another actress who fell prey to Harvey Weinstein’s malicious intentions. Known for her brilliant acting skills in projects like ‘Kiss the Girls, ‘Double Jeopardy,’ and ‘A Time to Kill,’ Ashley Judd has made a special place in the hearts of her fans. But, as they say, ‘one wrong decision can ruin your entire life,’ which is what happened with Ashley.

Like many other Hollywood actresses, Ashley also ran into Harvey Weinstein, who suggested her various projects and took this as a route to exploit her sexually. As soon as Ashley points out Weinstein for his indecent behavior, he begins to take revenge. As a result, Weinstein insisted Peter Jackson not cast her in his next ‘Lord of the Rings’ trilogy.

Charlie Sheen never had a good body image. Instead, he was always known for his controversial marriages, drugging habits, and encounters with the police. This bad-boy image had no impact on Charlie’s career, and he worked smoothly in the industry until his tiff with co-star Jon Cryer came to light.

Charlie soon began to see disinterest among the industry people to cast him in projects. However, he never gave hope and tried to come over the bad experiences by acting under his birth name, Carlos Estevez in 2013’s Machete Kills.

One of the most famous names on the blacklisted list is Harvey Weinstein, the sexual predator. Harvey and his brother Bob had produced quite a lot many projects in the Hollywood industry, and people believed Harvey was untouchable. However, Harvey had always owned all the intentions to touch others against their will and perform his duty as a sexual predator continuously.

Harvey was one of the biggest names highlighted during the #metoo movement, and he was sentenced to 23 years by a New York Judge in 2020.

So, these were some of the most popular yet controversial names in the list of top blacklisted Hollywood celebs.