Importance of ETL Listed & UL Listed Cables for your Network 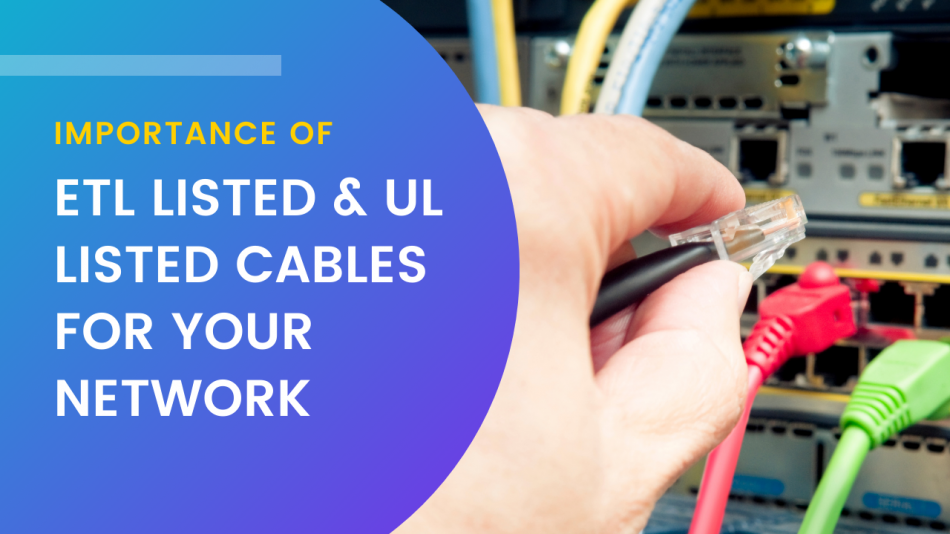 When searching for the right ethernet cable for your network on Google, you have often come across the terms Cat6 Plenum ETL-Listed or Cat6a Plenum UL-Listed. Do you know what these terms ETL and UL mean? Do you know the importance of ETL and UL certifications?  Or do you know why Ethernet cables carrying these markings are so expensive? If not, you need not worry as we have got your back in the updated guide. All you need to do is to stay with us till the end.

UL stands for Underwriter’s Laboratories and refers to the certification issued after extensive testing and evaluation of a certain product against stringent standards set by this independent body. So when a certain product — just like ethernet cable — is granted a UL certification, it means that UL has tested and evaluated the ethernet cable against all stringent standards and the product is completely safe for use in all potential applications. UL certifications are very expensive and therefore, ethernet cables carrying UL-Listed markings are expensive than those that do not carry this marking.

ETL stands for Electrical Testing Laboratories and refers to the certification issued after rigorous product testing against stringent and independent standards set by the Nationally Recognized Testing Laboratory (NRTL). Just like UL-Listed marking, ethernet cables like Cat5e Plenum UL-Listed are completely safe for installation in all potential applications.

What is the difference between ETL and UL?

Both certifications or markings are somewhat similar as both stems from Nationally Recognized Testing Laboratory’s stringent testing regime that testifies that the product in question is completely safe for use. Still, there are some differences between the testing methodologies of both ETL and UL.

Now, let’s explore the features of some of the most widely-used ETL-Listed and UL-Listed ethernet cables.

As the name suggests, it is a Category 5th cable that is plenum-rated. A Cat5e Plenum UL-Listed comes with a CMP-rated (Communications Multipurpose Cable Plenum) jacket. It is the highest rating for an ethernet jacket as supreme quality material is used during manufacturing. A CMP-rated cable is run in the plenum or horizontal spaces of the buildings. These cables are UV and fire-resistant and they emit no toxic gas during burning. CMP-rated cables including Cat5e Plenum UL-Listed cable halt fire progression.

As it carries the UL-Listed marking, it means the product has been tested against all the existing widely accepted safety protocols.

The cable demonstrates data transfer rates of 1Gbps and 100Mbps over lengths of 50 meters (164 feet) and 100 meters (328 feet) and is accompanied by 350 MHz bandwidth capacity.

Cat6 Plenum ETL-Listed is 6th generation ethernet cable. As it carries the ETL marking, it means that the cable has been tested against all safety standards and is completely safe to run in plenum spaces of buildings in the USA and Canada.

These lightning-fast data transfer rates are accompanied by a bandwidth frequency of 550 MHz. This cable is specially designed to be used in high-speed applications.

The Cat6a Plenum ETL-Listed is also a 6th generation cable but it is an augmented one. As it also carries the ETL marking, it means that the cable has been tested against all safety standards and is completely safe to run in plenum spaces of buildings in the USA and Canada.

The cable easily sustains data transfer rates of 10 Gbps up to a distance of 100 meters and comes with a bandwidth capacity as high as 750 MHz. It means your signal quality remains intact and you enjoy super-fast speed without any interruption.

This cable is also UV and fire-resistant and emits no toxic gas or smoke while also halts fire progression.

Now the question here arises which among the 3 is best for you? Well, it depends on your requirements. For simple residential use, Cat5e is best. For high-speed applications and commercial usage, there’s no better choice other than Cat6 and Cat6a cable.

Also, if you are into gaming, you should go with either Cat6 or Cat6a. Using these cables will future-proof your network and both of them are also backward compatible.