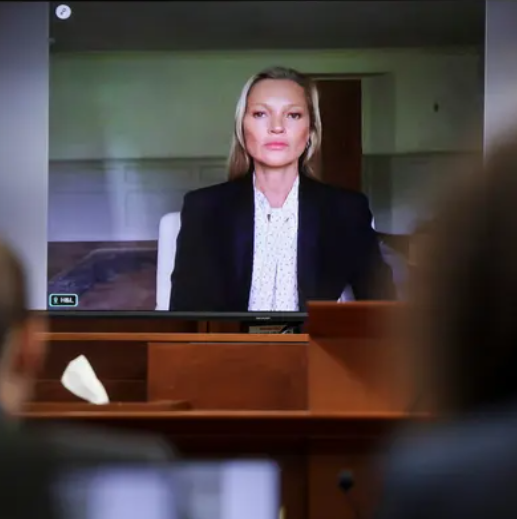 In the Depp Vs Heard case Johnny’s ex-girlfriend was called to testify. She very clearly said that she did not kick her or push her. Read more…

Kate Moss is a popular British supermodel. She rose to prominence in her career in the 1990s. She used to be Jonny’s girlfriend before Jonny got involved with Amber. During her testimony in court, Moss denied the rumor about being pushed and kicked by Jonny. She said, “He never pushed me, kicked me, or threw me down any stairs,” In fact, she explained that she once slipped down a set of stairs while she was on a vacation with Jonny Depp in Jamaica. The accident happened at a resort, she had hurt her back, she said.

“As I left the room, I slipt down the stair and I hurt my back. He came running back to help me and carried me to my room,”

Here is the most popular cross-examination that netizens are talking about. It shows how Johnny’s lawyer Camille Vasquez grilled Amber Heard. The full scenario is here:

Johnny Depp had taken the stand to reject Heard’s testimony earlier in the trail. He testified that he had taken the drug known as MDMA about six to seven times so far. When his attorney asked him if he used to take 8 to 10 pills at a time he replied, “No. I’m pretty sure I’d be dead. I think one would die rather quickly,” he said.

“Insane,” Depp replied. “It’s insane to hear heinous accusations of violence, sexual violence, that she’s attributed to me and accused me of. I don’t think anyone enjoys having to split themselves openly and tell the truth, but there are times when one simply has to because it’s gotten out of control,” Depp said.

The trial concludes on the 27th of May, 2022. Most testimonies in the US court came in the final week of the Jury trial. Now, we’re waiting for the closing arguments on Friday.