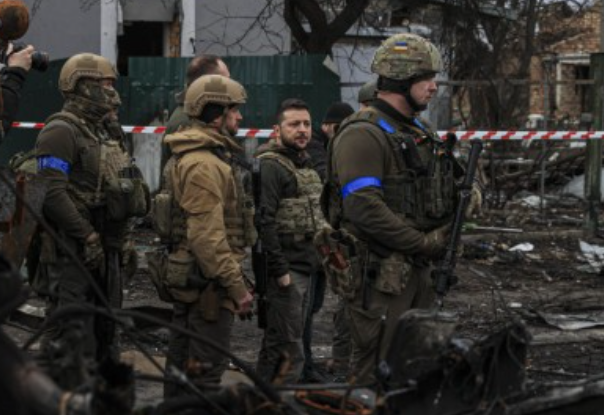 There has to be a war crimes trial against Russia says, Biden. On Monday he said evidence needs to be gathered for trial against President Vladimir Putin.

Ukrainian officials have been accusing Russia for war crimes after the discovery of dead bodies and mass graves in a Kyiv suburb.

Read: Ukraine: Russia Executed Civilians in the Town of Bucha

Following this President Joe Biden has asked for trial against Putin and suggested to look for enough evidence against the culprit. Earlier only 20 bodies were found on the streets of Bucha but now according to the mayor of Bucha over 200 bodies were buried in mass graves in the town, in the areas that were recaptured by Ukraine recently.

Some of the 20 men that were killed by the Russians had their hands tied behind their backs and they were dressed in civilian clothing. Zelenskyy has accused Russia of genocide and has demanded tougher sanctions against Russia.

The EU is considering new sanctions on Russia. The horrific discoveries in Bucha is worried people across the globe. Germany, however, is not willing to ban imports of Russian gas. France and Germany will expel 75 Russian diplomats because of the act of brutality Russia has shown towards its neighbor.

On Monday there was an event by the International Committee of the Red Cross, to evacuate civilians from the city of Mariupol but it was blocked. The US ambassador said to the UN that America will seek suspension of Russia from the UN Human Rights Council.

Over 10.5M civilians have left Ukraine looking for shelter in Europe. Over 4 million have fled abroad, and half of these are children.

There was pre-taped speech from Zelenskyy at the Grammy awards ceremony on Sunday. In the speech Zelenskyy urged people to use the power of music to “tell our story.”