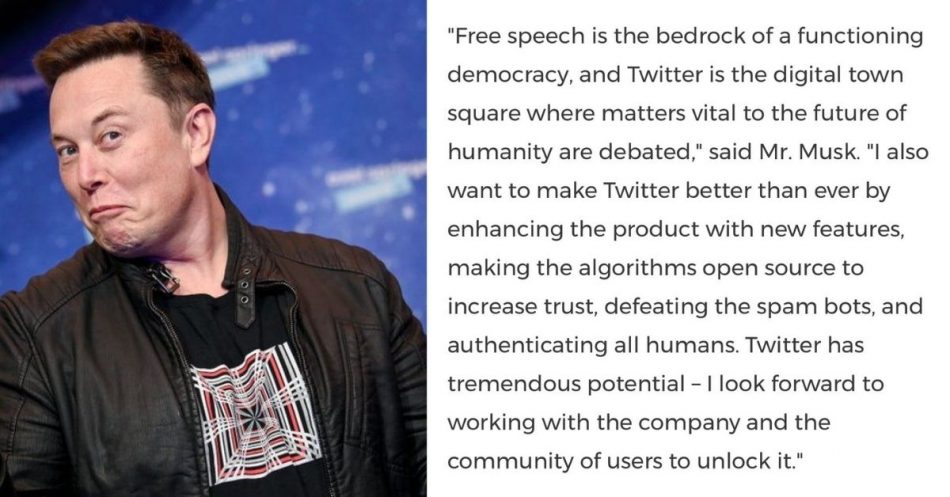 Twitter has accepted Musk’s offer to buy the social media platform for a billion more than what he was initially offering. Read More…

What a dramatic turn of events! Musk finally is happy after having tons of doubts about whether Twitter would agree with his proposal.

The Tesla CEO had unveiled his bid only 11 days ago and we were all sure about how the hostile takeover would be rejected. Musk had said he would like to transform Twitter into a “platform for free speech around the globe.”

So we are all ready to see what Musk does with the platform. The platform is said to go private from public soon. One of the most influential social media platforms and the multibillion-dollar company, Twitter, has revolutionized several organizations and we all know about how the former president of the USA, Donald Trump used the platform to reach his audience.

Initially named Twttr the platform was out for people in the USA to use in the year, 2006, and it only allowed 140 characters even after it moved to be a web platform from being strictly for mobile devices. The pound symbol “#” also known as the hashtag was made popular by this platform. By 2009, people around the globe were using the platform.

Obama was the first president to have a Twitter account and he even answered questions on the platform. It gradually became a powerful tool for protesters and celebrities to vent out whatever they wanted to.  “Free Speech”, well people did have some but still Twitter didn’t hesitate to ban profiles that didn’t follow the rules or promoted hate speech.

Jack Dorsey, the CEO of Twitter, in 2018, had said, “ There are two main categories of users on Twitter. One is the people you follow, and those tweets end up in your timeline. Two, are the more common shared spaces like search, trends, and also replies. That’s where anyone could interject themselves, and that’s where we see the most gaming of our systems. And that’s also where we’ve made the most progress in terms of identifying these patterns and shutting them down before they spread too far.“

So we’ve all been using Twitter to get our opinions heard, to follow the latest updates on anything that may be trending, be it sports, award shows, the war, or even mishaps such as earthquakes and plane crashes.

Let’s see what the Tesla CEO does with our beloved platform Twitter! Leave your comments below!